A Child is Born

I often remember a message I first heard from a very successful salesman. It went like this '.. the more people I meet the more sales I find I can make'. I think the same applies to opportunities. Meeting lots of people so often can lead to opportunities one would never have thought of.

HUGS worked with Sr. Theresa of the Banyateresa Catholic Sisters to build Good Shepherd Special Needs School.
The same order of sisters run the Maternity Hospital at Fort Portal and it has been possible to help a number of volunteers to spend time there over the last two years. The hospital with about 230 beds and 5 doctors and 7 midwifes delivers between 2000 and 3000 babies each year. We are looking to develop a twinning arrangement with St Mary's Hospital, part of the Central Manchester University Hospitals Trust where about 7000 babies will be delivered next year. 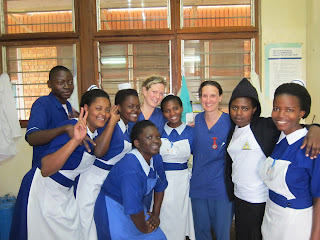 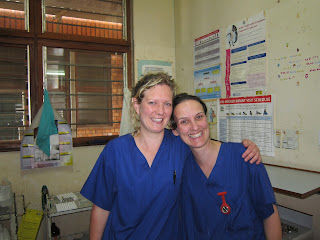 Ruth and Jill who are both Paediatric Research nurses have just returned from Fort Portal and found it a wonderful experience. More later but these pictures were taken at Virika Hospital 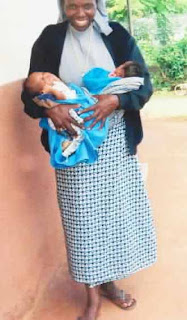 The same group of Ugandan friends introduced HUGS to the Lira Babies Home, an orphanage in one of the most troubled areas of Northern Uganda. Sr Demmy usually has between 30 and 50 babies to look after and the generosity of HUGS supporters means that we have been able to fund about 20% of the running costs last year and next year. It costs about £15000 per year to cover all the costs.
My picture shows Sr Demmy with twins taken into the orphanage in the last few days. They are about one day old in the picture.

Although HIV/Aids has reduced very substantially in Uganda is is still a very serious killer. The Lira Babies home looks after many children who have inherited this condition. 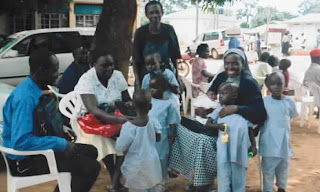 The picture show a group of helpers at Lira with 5 HIV youngsters.

We have had some great letters of thanks from our Uganda (and Rwanda) friends who want to tell you how much they appreciate the efforts and the money donated.
Posted by PWM at 14:26 1 comment:

Christmas Thank You from Good Shepherd to all Donors

Thank you very much for your letter and Asobora Christmas book which made us very happy.  The Teachers and Children were so happy to read the stories of Asobora, Busobozi and Magezi, they made them laugh their heads off!  We take this opportunity to thank Denise for her tireless effort and initiative she has put in this project.
Please send all our thanks to the many donors who have helped to make our school such a wonderful and happy place.
Theresa
OUR DEAR DONORS,
Good Shepherd Special Needs School is the first school of its kind in Western Uganda.  It started in 2008 with 40 Children, this year 2011 the enrolment has increased to 120, and 11 Teachers.  Categories we have in this school:
The school has taken its first few hesitant steps on the road to changing attitudes towards disability and setting itself up to educate or act as role model for the wider community. The Vivid examples are the photos I have sent you, Stella has down syndrome and severe intellectual impairment.  As in African culture Parents tend to neglect children with disabilities take it as a curse, so the story of Stella was very sad when the neighbours told me that her Parents keep her locked in the room, they don't want anybody to see her! 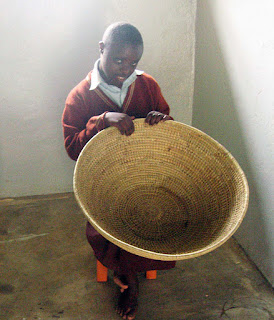 When I visited the family, Stella was a miserable child, she started crying when she saw me.  I pasuaded the parents and she started at our school, now is a happy girl is being equipped with practical skills and her Parents are also happy.
The same story with Derrick who can neither talk nor speak, he was also a miserable Child but now is happy as you see him in the picture. 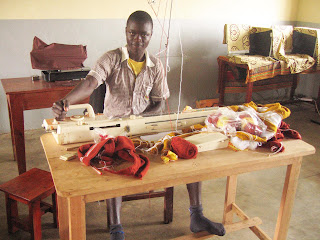 We have a variety of activities as singing, dancing, drama, sports etc to make the children happy and feel at home.  More so they improve academically as they are given special, individual attention in class.  Again we thank you very much for your generosity and kindness towards these vulnerable children, because without your contribution we couldn't have managed as most parents are reluctant to pay school fees in time or  not to pay at all as they take these children to be useless, but we have tried our level best to sensitize and we shall continue as some have started coming up with positive attitude.
Posted by PWM at 18:38 No comments: