Outreach and what it means

Getting Good Shepherd almost finished is fine for the 120 children with disability who are attending but our friend Dr Pat Scampion was keen to use the school as a platform to reach out to more children who for various reasons could not get to the school. One reason is that the school is now full!


So would it be possible to create an outreach programme to help children and families further afield?

Ed Paulat and friends raised enough to buy a vehicle. Pat started a charity called Improving Chances to fund an outreach project and it has now started.

She took a team of clinicians to Uganda a couple of months ago and  this is what she told us;

The team I took with me this time assessed over 60 children in two weeks plus some of the children already in the school. Many  of the children had epilepsy, and others profound cerebral palsy or other neurodisability. Theresa's teachers were very receptive, particularly to our ed psychs advice on behaviour management, and differentiating the curriculum. Theresa was also able to find a local physio from the Referral Hospital who is prepared to visit once a month and follow up the work we did.

So now Theresa has five groups of 4-6 very severely disabled children being brought into school once a week in the vehicle generally with a parent, for play, stimulation and parent to parent support, and some basic pysio. The children are truly little survivors and their parents obviously very committed, but we didn't feel able to ask them for fees given the overt and hidden financial burdens such heavily disabled children present their families. However, I think we may find that some of these parents are sufficiently assertive to want to develop the service themselves in due course. In the meantime "Improving Chances" is funding this development. Also I have sent you a picture of Hannington who is our Student for the Out reach programme.  He is a young lad with epilepsy, who has been longing to go to school, but because of the sickness it could not allow him to live a normal life, like any other boy of his age.  He is now very happy as he comes to our school, Good Shepherd and get practical skills which will help him to live an independent life and also become a useful Citizen with a future.  He likes wood work very much.  His Parents are also very happy they could not imagine that their Son will also do something useful in life.  Also as teachers we also feel very happy to see our objectives are achieved.
Posted by PWM at 18:46 1 comment:

2011 was a bit of a nightmare for our friends at St Zoe's in Uganda. A corrupt builder stole money and set back our progress on both the secondary and vocational schools by about a year and the serious drought and massive inflation in food prices made things worse.
But the good new is that things are getting back to normal. School attendance is high and we have been able to restart the building of both the secondary and vocational schools and also build a new latrine block for the seniors. We aim to have the buildings complete by about June this year and to start using them very soon after.
We have also put in a bid to Orange for a grant to set up an Internet Cafe and have almost raised the money needed for a major fresh water borehole and associated water storage and distribution systems for both the school and the village. 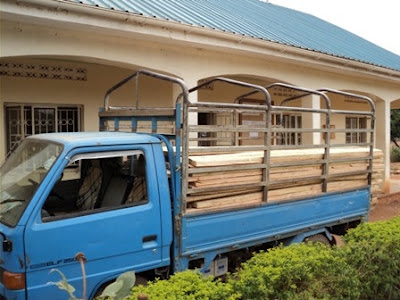 The School truck delivering timber for the new buildings at St Zoe's.

Although HUGS is not directly fund raising for Rwanda we may wish to do so in the future. But we did visit last year and gave a small grant to help the Banyatereza Sisters to carry out a feasibility and design study for a primary school.
The designs were used to raise funds in Netherlands and thanks to a charity it was possible to make a start and to build 4 class rooms and start the school The Dutch donors gave €43000, a really generous gift.
The school will open the new buildings in the next few weeks. 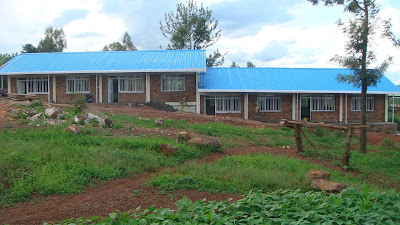 I know this Blog is all about Uganda and the aim is to keep all our many supporters informed about what is going on at our schools.
But just now and again something pretty exciting happens and you won't mind if I share it. 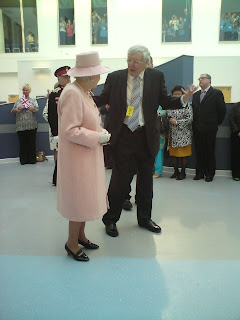 This Jubilee year for Her Majesty the Queen is pretty special and my hospitals were really privileged to have her visit us on March 23rd and to open the hospitals officially. 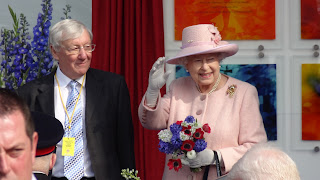 The weather was perfect and the weeks of planning all paid off with a truly memorable day.
her great grandfather opened the Manchester Royal Infirmary in 1909 and there really was a great link with the past. 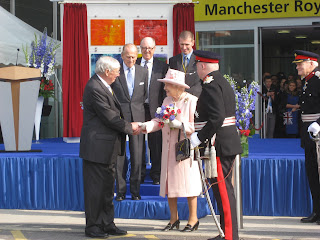