After some of the rain we had in Englnd recently it got me thinking about water in Uganda. You would think that with the second largest freshwater lake in the world there would be no shortage. But live up country things can be very different.
Uganda used to have fairly predictable dry and wet seasons but like much of the world this really seems to be changing and not for the better.
Our St Zoe's schools used to rely on a large and rather forbidding pond for all the water needs of perhaps 300 on the site during term time. 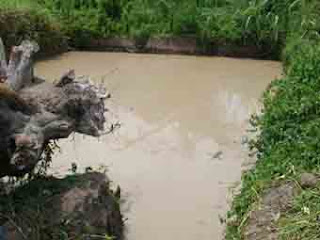 We brought a hydrologist from Kampala to carry out sonar exploration to see if it would we worth sinking a bore hole.
The answer was disappointing.
So with the help of Bob Bishop's family and other donors we funded a water harvesting system with capacity of 250,000 litres. This was enough to cover all the needs for the dry season. 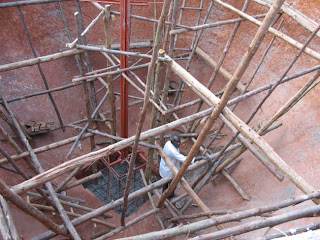 But not any longer. Last year we had to use our truck to travel 12 kilometres to Mubende and purchase water from stand pumps.
So this year we are just starting a major enhancement costing £14000 and this will collect water and filter and store it.
I am writing this in Cairo, 6000 kilometres from the source of the Nile in Jinja, Uganda. This extraordinary river brings life to much of Uganda and all of Egypt and the 22 million people who live in Cairo.
It is no surprise that nations go to war over water. 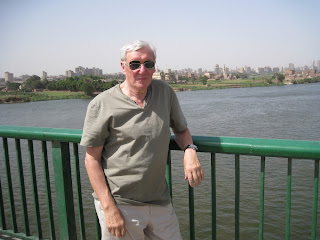 We will say some more about water in later messages
Posted by PWM at 17:58 No comments:

In England we have about 100,000 Doctors working in the NHS and with a population of 51 Million that works out at one doctor to every 510 people. In Uganda with a population of 32.3 million there are about 2600 doctors which is one doctor for every 12,500.
But it gets worse. Population is growing at 2.69% compound and when you add this population growth to the doctors who die or retire and then add on the 152 who will graduate this year the patients per doctor goes up to !2,800 a worsening of  2% every year.
Infant mortality is 65 per 1000 live births compared with our 4.85 which is bettered by many developed countries.
A new Medical School was opened at Gulu about 3 years ago and this makes 3 in the country but it is going to take a lot more to make a real difference.
Uganda has 32 Nursing Colleges but here the ratio of nurses per 1 Million  of population is only 60 whereas in England it is 7800 per million.
This represents a major problem worsened by the average nurse salary of less than £100 per month and a recent survey showing that 70% of Ugandan nurses are hoping or planning to leave the country to work in Europe or USA.
The NHS works hard to ensure that no recruitment is done in Uganda and many other Sub Saharan countries but sadly the same cannot be said for non NHS health organisations. 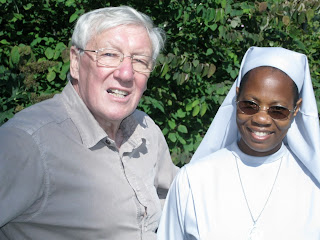 Lots of our HUGS supporters work in health and we decided about 2 years ago to sponsor a highly experienced practise nurse call Grace who has been working for some years dealing with maternity, HIV/Aids and Malaria among other things. She won a place in the University at Gulu and completed her first year training to become a doctor.
She is a very courageous Nun and loves playing football and netball with all the other students where she is the only Sister.
Posted by PWM at 19:51 No comments:

As a fund raiser to raise £10,000 to provide a vehicle for outreach at Good Shepherd, Erhard Paulat returned today from climbing Africa's highest mountain Kilimanjaro in Tanzania 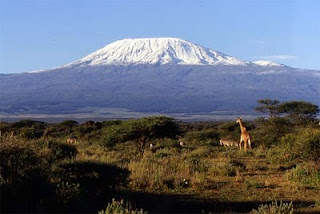 This is a wonderful initiative and will be supported by lots of General Motors and Vauxhall dealers in the UK.
The vehicle will give our friends in Fort Portal the opportunity to visit the children and families with handicapped children and bring them teaching and support.
In Africa many children like these are totally neglected and thought of as worthless. Their lives can be helped enormously by quite small things. 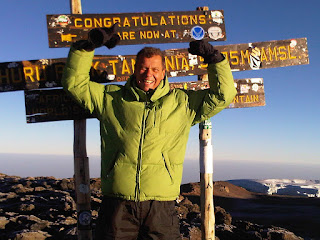 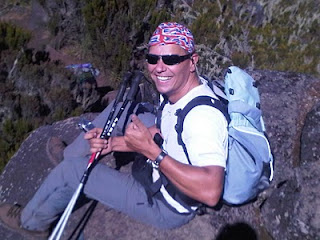 Children in Uganda really love to sing and dance and for we Europeans it is really quit a surprise to see how confident and uninhibited they can be.
One of the lasting memories you get when being welcomed at any Ugandan school is the entertainment. Wonderful singing by children with no fear or inhibition. This picture shows some of the children at Good Shepherd school for special needs children at Fort Portal. 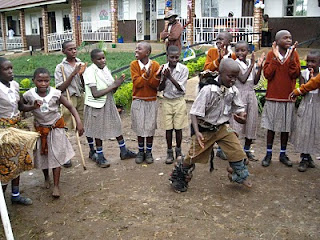 The children who attend are not the most seriously disadvantaged or handicapped but all suffer from learning problems. In a normal Uganda primary school if any of these children were sent to school they would be in a class of sometimes 100 plus and no teacher could give then the special attention and help they need. Most would not be sent to school because parents who may have six other children often see it a real waste to money to send such children to school. If they do go then they are often bullied, a worldwide habit.
But now after Good Shepherd has been open for two years we can see some really incredible changes and parents have discovered new value in their children.
See the fullsize version at: http://s855.photobucket.com/albums/ab117/pwmount/?action=view&current=bb01913d.png&evt=user_media_share

Continuity for our schools 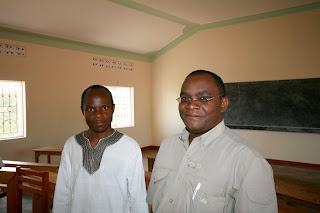 John Baptist and Charles, two of our KEDO Trustees
When we started the St Zoe school buildings back in 1998 we had no idea just how it would develop. A few acres of land and one building is now 80 plus acres and around 10 buildings with more to come.
Fifteen sponsored children at the start but the school and others we have been able to help have assisted well over 1000 children get a primary education and now starting both secondary and vocational training.
We decided that long term continuity is really important and for that reason all the assets and real estate in Uganda are being transferred to a newly registered Non Governmental Organisation (NGO)
The Trustees are being appointed andcare being chosen to bring strong professional cultural and local skills to the group.
In the early stages we recognize the need for top class skills in civil engineering and both Charles and John Baptist (in the photo) are top class professionals. Like all Trustees of charities they work for us unpaid.
The NGO is called Kagoma Educational Develoment Organisation. It now has it's own bank account and constitution.
Our Ugandan Trustees have proved invaluable in the design and tendering processes for our next 3 projects which I will cover in later blogs
Posted by PWM at 16:27 No comments:

Email ThisBlogThis!Share to TwitterShare to FacebookShare to Pinterest
Labels: KEDO 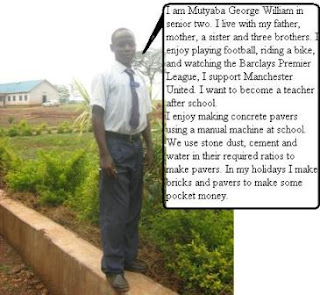 Whenever we see TV programmes about Africa we so often see the traditional mud and wattle construction of peoples homes. But now you can travel across from Kampala to Fort Portal which is about 5 hours and the only ones you see are used for storage. People build brick and cement houses which are much better. But the downside of course is that there is a huge demand for bricks and for brick making. If they are made locally then the technique is to use a simple clay mould to make the brick, then dry it in the sunshine and finally build a sort of large igloo and light a fire inside it. 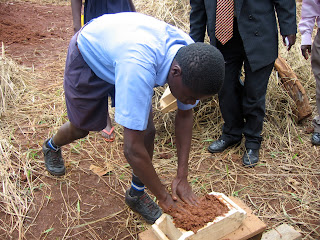 William is keen to develop his skills and we have a machine at the school which lets him learn and make bricks much more quickly than the old hand method where a man can make about 400 in a day
Posted by PWM at 11:37 No comments: