With a great deal of press attention quite rightly being given to the way so many children are being abused in UK it is good to reflect on what happens in Uganda. Children get abused all over the world and it is pretty tough for teenage girls and for children with learning disability. Abuse is everywhere and this is the sort of challenge which HUGS is doing a little to try to address. We plan to have a special programme at St Zoes to focus on these matters.
But the Lira Babies home which you all support is also doing its bit and in a very big way. 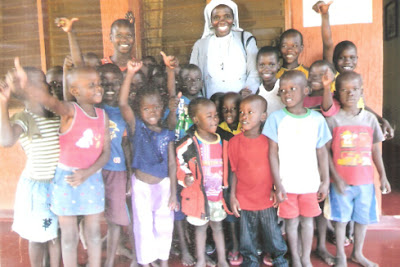 The home now has 37 children who are orphans or abandoned. One has a serious physical disability. Sr.Demmy takes in everyone who comes and the children are placed with a member of the extended family usually before the child is 5. I am sure the rigour of our adoption agencies is missing but suspect that this is a small risk in a community where everyone knows everyone else and can keep an eye on things. We could learn from this. HUGS has been supporting Sr. Demmy for several years and her work gives children a Sure Start.

James was murdered last week. We did not know him but he was younger brother to Fr John, Andrew,  and Sr Immaculate and  Annette. He had gone to work in Southern Sudan with his wife and two children.

Any idea that a culprit might be found and prosecuted is nil. We take all these things for granted. They are pretty non existent in much of Africa.

He left behind a wife and two children at primary school.HUGS Trustees will see if we can cover the cost of these things.

Thanks to the brilliant efforts of the Mudderlings (see earlier blog) we will have enough to cover this. Well done girls. You could not have timed it better.
Posted by PWM at 17:23 1 comment:


Tough Mudder® events are hardcore 10-12 mile obstacle courses designed by Special Forces to test your all around strength, stamina, determination, and camaraderie. Only 78% of entrants successfully complete each challenge. As the leading company in the booming obstacle course industry, Tough Mudder® has already challenged half a million inspiring participants worldwide. But Tough Mudder® is more than an event, it’s a way of thinking. By running Tough Mudder®, you’ll unlock a true sense of accomplishment, have a great time, and discover a camaraderie with your fellow participants that’s experienced all too rarely these days.

So when Virgin Money Giving asked me to support THE THREE MUDDERLINGS I had no idea who these 3 young women were and what they are going to do next weekend.

I have never met them and the only way I could find them and say Thank You was to send a small donation. They have been doing volunteer work in Uganda and wanted to help a good cause. They Found HUGS by in Internet search, They are called Joanne, Kimberley and Nabila.

Good luck girls and if any supporter would like to help them them search for Three Mudderlings on the VIRGIN MONEY GIVING site or search for Helping Uganda Schools on the Virgin site or click below
http://uk.virginmoneygiving.com/fundraiser-web/fundraiser/showFundraiserProfilePage.action?userUrl=threemudderlings&isTeam=true
Posted by PWM at 08:08 2 comments: