Progress with the School for the Deaf Children

I am posting the report we received today from our partners in Jinja, Uganda. Led by Sebastian it is called the Organisation for Parents with Deaf Children.


We agreed with John, the builder, that where possible Youth with disabilities (skilled and unskilled) will be given first priority to work on this project. This has been fully observed as eight deaf youth have been working at the site and fully paid their wages per day. Of the eight (8), 2 are masons while the other are unskilled workers. 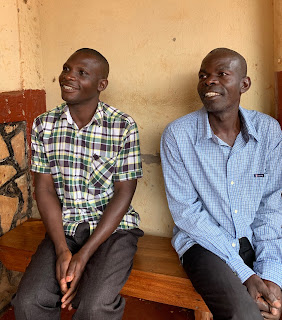 Builder John with his son

The construction is being implemented under the phased manner which means that funds are being sent and received to cater for one phase after the other. So far two phases have been successfully completed (Sub super structure and Super structure phases).
In the first phase, we (HUGS and JOPDC)  agreed that the phase one was to involve constructing the whole foundation of the facility.

In phase two, we (HUGS and JOPDC) had agreed the constructor was to build the two dormitories, three office room, matrons' room, staff washrooms, two classrooms, and washrooms for pupils only. The rest of the other one classroom, school offices, all on the right were to come later.
However, when the construction began we realised that the remaining part would compromise the security of the children when the school opens in early 2020 since there was no perimeter wall around the entire facility.
JOPDC management and the constructor sat and had a change of mind and plan. We finally
agreed that instead of constructing the staff quarters first, we modified the timing so that a secure site could be achieved with staff using an empty classroom during the early of the project. 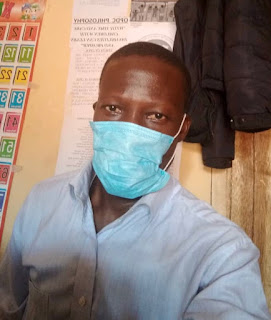 We moved very well with the construction up to the beam level but then the Corona Virus pandemic had escalated and the government had issued harsh Corona Virus prevention guidelines some of which required that all activities that required a seasonable number of workers be suspended until a future date. JOPDC management therefore had to adhere to these guidelines and on 27th March, the construction was put on halt for 14 days as directed by government.
When the Lockdown is lifted by Government, we shall start from where we ended.

Our next phase will be Roofing and Ceiling of the entire facility. 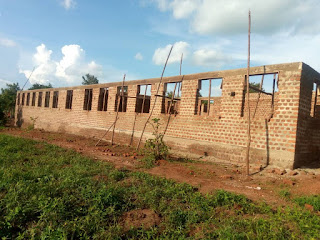 SIGNIFICANT ACHIEVEMENTS GAINED DURING THE TWO PHASES
The community has become supportive and proud of the development we are bringing to the Kagoma Sub county and Jinja District in general. Many district officials and local leaders have given us courtesy calls to the site highly recommending our progress. Other leaders who have not known about the project are always left in shock, wondering and asking who are the people behind the growing magnificent facility in the area while passing on the road.
The Differently Abled Youth especially the deaf youth are happy for having been considered to work on this project. Many have had no stable employment as the community looks at them as being unable to do good work. Such wages have drastically improved their well being and their families as some of them have spouses and children at home.
During the course of our construction, community members and parents have been bringing
children with hearing impairment, visually impaired and intellectually challenged children for registration. The majority of them were new to us. This has been as a result of the community knowing that the school being built is for Differently Abled Children (DAC). By the time we stopped building we had registered 12 children in just a space of two months.
In a similar way, some adults have come to us to register their interest to work with us either as casual workers or full time staff. The case in point, many ladies have expressed interest to work as matrons, cooks, canteen attendants, etc. 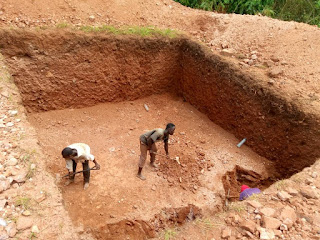 Creating a water storage tank at the school

CHALLENGES FACED DURING THE CONSTRUCTION SO FAR.
Inconsistent availability of water supplied by National Water and Sewerage Corporation
(NWSC). This has greatly affected our budget as we have heavily depended on water supplied by Uganda Police, Fire Brigade department at a relatively high cost ( £50  per truck).
Prices of certain building materials especially cement, and bricks, have increased. This is mainly attributed to the many taxes government charges the manufacturers and many other community members building their own houses respectively.
The Corona Virus outbreak which has made us to suspend the work at the site following the
government Lockdown.
In conclusion, in our own thoughts, we are happy to report that the project is on course and it will be delivered on time so that by end of the year it is ready for use early January, 2020.
However, this will be possible if funds continue to be available.
It is very important in our subsequent projects to continue involving our Differently Abled
Youth/ Children (DAY/ C) as it is the only way we can show the community that such youth are able to work like the able bodied youth.