Sr Grace Nanyonndo, one of the University students sponsored by HUGS, completed her Medical Degree course last year and is now coming to the end of her first year as an intern. This gives her a medical licence and the authority to practice.

In Uganda about 800 doctors qualify each year and the total number of doctors in the country is about 2000. That is one for every 16,000 of the population. The UK has one of the lowest ratios in Europe with one doctor to every 360 people.  Greece for example has one for every 161 people.

"Nurse, nurse" I hear them calling and don't know who they mean. And then I remember that they mean me. Everyone who is a woman must be a nurse. But now I am a doctor. Now I find myself writing prescriptions nervously. Can it be me who is doing this?

I grew up in the home of my grandparents since both my parents died before I was 3 years old. Never did I think that one day with all the help they and others have given me, would I become a clinical officer and then in 2014, become a doctor. 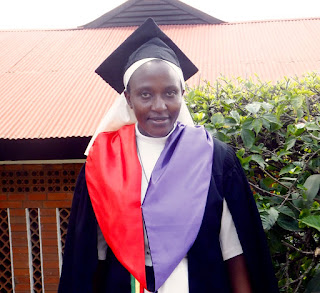 Surgery was my first discipline and I would spend every half a day in minor theatre doing minor procedures like incision and drainage, excision lipomas, repair of umbilical hernias and surgical toilet and suture. My head of department was already seeing a surgeon in me. What hurt me most were the children with burns due to negligence of their parents.

Gynaecology and obstetrics was my best, because I performed more than 20 operations and I succeeded in all of them. I enjoyed answering missed calls with reasons like I have been on table. My main aim is to deliver a healthy baby.

My third last was Paediatrics. There I saw masses of children including neonates in Nursery. Children are interesting creatures who you have to think for, mainly the very small one who cannot express themselves. They impressed me most because they respond very first once you do the right thing for them. Their main problem was pneumonia and acute waterly diarrhea. Neonatal septicemia in the neonates. Malaria has greatly declined to number 4 cause of death in Uganda to pneumonia, Diarrheal diseases.

Currently in my last Discipline, That’s Medicine that caters for all the patients above 12 years. The most active clinics in the medical department are the HIV clinic that runs every day Monday to Friday.  Secondly is the Hypertension and Diabetic clinic that operates on Monday and Friday of every week. It feels good to help.

HUGS is developing its programme of educational sponsorship with more students being supported. We will tell you more about them on the next blog.